Govt. of India has announced Sovereign Gold Bond Scheme 2015-16 in which they will sell 1 Gram of Gold Bonds for tenor period of 8 years which will pay you 2.75% per year (Taxable). Since lots of people buy intangible gold bonds, here now govt of india also will sell gold bonds. This scheme is part of Gold Monetization Scheme (GMS). 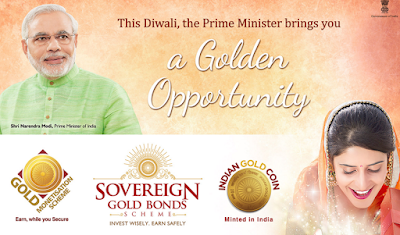 The Bonds will be issued on November 26, 2015. Applications for the bond will be accepted from November 05, 2015 to November 20, 2015. The Bonds will be sold through banks and designated post offices as may be notified. After Mudra Bank, and GMS, Govt of india has announced one more scheme to empower dead money.

It may be recalled that Honourable Finance Minister had announced in Union Budget2015-16 about developing a financial asset, Sovereign Gold Bond, as an alternative to purchasing metal gold. T

How to buy Gold Bonds under Sovereign Gold Bond Scheme?

One can buy gold bonds from Banks or Post office, with paying amount of gold bonds in Cash payment/DD/Cheque and NEFT too. You need to provide your KYC details, documents as Aadhar card, Voter ID/Pan card, or passport will be required.

How much we can buy?

Minimum 2 Units (2 Gram of gold) and maximum 500 Grams per person in one year (fiscal year April to march). Even in join account, 500 gram of gold bonds are allowed to buy.The Bonds will be denominated in multiples of 1 Gram/Unit.

How much interest rate will be paid – Benefit of Sovereign Gold Bond?

People who will Invest money in gold bonds will be paid 2.75 % of interest (will be paid every six months). Tenor period of 8 years with exit option from 5th year to be exercised on the interest payment dates.

Issue Price and Redemption price of bond will be fixed in INR on previous week’s (Monday–Friday) simple average of closing price of gold of 999 purity published by the India Bullion and Jewellers Association Ltd. (IBJA). You can convert gold bonds in Demat form too.

Is Sovereign Gold Bond are taxable?

Note :- The Bonds will be eligible for Statutory Liquidity Ratio(SLR). Commission for distribution shall be paid at the rate of 1% of the subscription amount.