The statue of unity is an organized 182 meters (597 ft) monument of Sardar vallabh bhai patel. It will be created directly facing the Narmada dam, 3.2 km away on the river island named sadhu bet near Baroda (vadodara) in Gujarat. Let’s know more about it. 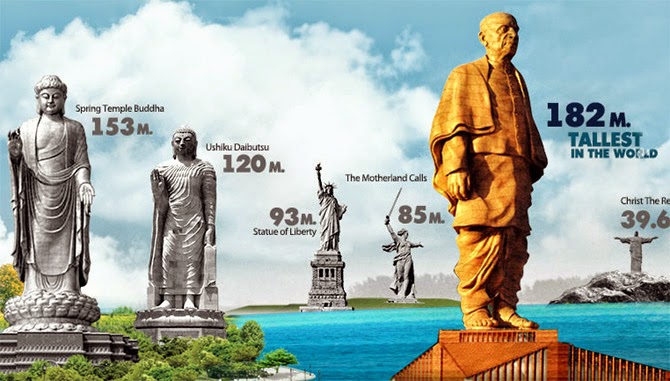 The statue of unity will be the world’s tallest statue. Sardar vallabh bhai patel rashtriya ekta trust (SVPRET) is a special purpose vehicle established by the Gujarat government and outreach programme across india.

Moreover, the total cost for this statue of unity project was estimated to be about 2063 crore by the government. However, larson and tourbo (L&T) bagged the contract in 27 October 2014 for its lesser bid of Rs. 2989 crore for the construction, maintenance, and design.

Furthermore, the project was declared on October 7, 2010. In addition, the statue of unity will also arrange good governance petition where people can write about their opinions for good governance.

The total height of the statue will be 240 meters from its base comprising base level of 58 meter and statue of 182 meter. In addition, it will be constructed with reinforced cement concrete, steel framing, and bronze coating. The statue of unity will require 75000 cubic meters of concrete, 5700 metric tonne steel structure, and 18500 tonne reinforced steel, rods 22500 tonne bronze sheets for construction.

Update on 25th March, 2015:- The Engineering Team of L&T has started working on the construction of the Statue of Unity, started with levelling the Hillock Sadhu Bet (where the statue of sardar patel to be constructed) near Narmada Dam. Government of Gujarat already got clearance from Environment Department. The statue of Unity project is likely to be completed by April 2018.

About statue of unity:-

The project “Statue of Unity” will start on 31st October 2014 and complete till 2018. Government of india is also organized Rashtriya ektda divas (National Marathon day) on birthday of Sardar vallabh patel Proud to be an indian! Jay Hind!