The desire of having superlative transportation in India has given birth to the very first high-speed rail line, named “Bullet Train”. The train is designed with rapid expansion regarding transit systems as well as railways. And considering modern India, the MAHSR Bullet Train is the very first bullet train in India connecting Mumbai and Ahmedabad.

The Mumbai-Ahmedabad High-Speed Rail project is under construction with a route of 508.17 km that would pass through nearly 12 stations. The estimated cost of this high-speed rail line is around Rs. 1.1 lakh crore which is around US$15 billion. The project was initiated by the National High-Speed Rail Corporation Ltd., also known as NHSRCL. The project was initiated with a loan of Rs. 88087 crores for 50 years from Japan at a 0.1% interest rate with repayments scheduled after 15 years from the line being operational. The current project deadline is December 2023 and the estimated completion is 2030. 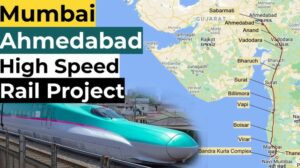 The trains would operate at a speed of around 320 km/h on an elevated overpass 10-15m above the ground. The lines in Mumbai would be built underground through 3 mega Tunnel Boring Machines (TBMs). The train line would run under the sea for around 2km at the Thane Creek for stations between Mumbai and Thane. The lines are designed with rolling stock comprised of Shinkansen E5 trains that are capable of running at a speed of around 350 km/h along with an operational speed of around 320km/h.

The foundation stone of the Mumbai-Ahmedabad Bullet Train was laid by the Prime Ministers of Japan and Indian Prime Minister Narendra Modi on 14th September 2017. After this, the construction of the bullet train route started with around 4000 employees in Vadodara.

Gujarat is very lucky, after the Delhi-Mumbai expressway, they are getting 2nd big infrastructure project in India. Through this piece of information, let’s check out the route and the current status of the Mumbai-Ahmedabad Bullet Train in detail.

As of now, the work is in progress only in Gujarat as the land acquisition was delayed in Maharashtra, and the work is not yet been awarded.

The conspicuous bullet train is sure to reduce the travel time between Mumbai and Ahmedabad which is currently 7 to 8 hours. According to the bullet train speed, the train would travel from Mumbai to Ahmedabad in merely 2 hours and 58 minutes. The train would make halts at 12 stops for 165 seconds duration at every stop. However, if the train would make halts at only four prime stops including Mumbai, Surat, Vadodara, and Ahmedabad, the distance would be covered in merely 2 hours and 7 minutes.

As per the Mumbai Ahmedabad bullet train route, the train would have halted at 12 stations including Mumbai, Thane, Virar, Boisar, Vapi, Bilimora, Surat, Bharuch, Vadodara, Anand, Ahmedabad, and Sabarmati. The fare of the bullet train would range from Rs. 3000 to Rs. 5000 depending on the station the bookings are made.

Considering the bullet train map in Surat, Surat would be the very first station that would be constructed for the Mumbai Ahmedabad bullet train. The location of the Bullet Train Station in Surat will be Antroli Village (near Kadodara). As per the latest news, the work on four prime stations in Gujarat that is Bharuch, Surat, Bilimora, and Vapi has accelerated and is expected to be ready by December 2024. And as per NHSRCL, Surat would be the first to be ready with the station. Again, as per the railway minister, the first bullet train in India would operate between Bilimora and Surat in the year 2026 covering a distance of 50 km.

Talking about the design of the stations, the local culture and architecture of the city would be considered. The new design of the station or station façade would consider the different functional requirements of every station in terms of massing, size, material, and volume.

What Will be Speed of Mumbai Ahmedabad Bullet Train?

The Mumbai - Ahmedabad High-Speed Rail will have a maximum speed of 350 Km/h, Operational Speed of 320 Km/h and Average Speed of 250 Km/h.

How Many Bullet Train Stations will be there in Mumbai - Ahmedabad High-speed Route?

There will be 12 stations are proposed as of now, Mumbai BKC, Thane, Virar, Boisar, Vapi, Bilimora, Surat, Bharuch, Vadodara, Anand/Nadiad, Ahmedabad, and Sabarmati.

How much will be Stoppage at Each Station of Bullet Train?

The Bullet Train will stop for 165 Seconds at Each station.

What Kind of Bullet Trains (Rolling Stocks) will be used?

The E5 Series of Shinkansen High-Speed Train will be used in Mumbai-Ahmedabad Bullet Train.

Henceforth, considering the bullet train in India map, all the stations in Gujarat are under construction currently. No doubt, the deadline was set for 15th August 2022 by the Indian Government, however, it wouldn’t be possible to encounter it due to the land acquisition issues initially in the Maharashtra state.