Patna, also known as Pataliputra, is the capital of the state of Bihar in northern India. It’s around 470 kilometers (290 miles) northwest Kolkata (Calcutta). Patna is one of India’s oldest cities, and it was known as Azimabad during the Mughal dynasty. The petrol rate in Patna is ₹ 116.75/Litre.

Patna is a riverfront city that stretches roughly 12 miles along the Ganges (Ganga) River’s south bank (19 km). Bankipur is a portion of the ancient city to the west and a huge new capital district to the southwest with broad roads, leafy avenues, and modern buildings. Patna’s contemporary structures are among the Government House, the Assembly Chambers, the Oriental Library, a medical institution, and an engineering college.

The mosque of Husayn Shah of Bengal (1499), the Sikh Temple linked with the 10th Guru, Gobind Singh, and the granary at Bankipur (1786), widely known as the Golghar, are among Patna’s ancient landmarks. The Patna Museum and the University of Patna (1917) are located. The Mahatma Gandhi Bridge across the Ganges connects Hajipur, located immediately north. 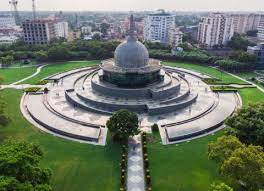