Cement is a means that helps in binding the concrete which is the primary material for literally every type of construction that is including hospitals, roads, dams, ports, and whatnot. When it comes to cement production companies, India is ranked the second number. It has been seen that the whole industry of Indian cement has witnessed massive investments and it was not only at the national level but the also at international level.

Which Are Top Cement Companies in India 2022?

The following are the top 10 cement companies in India:- 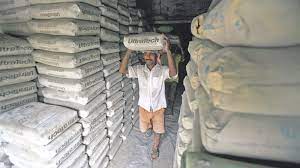 Ambuja Cement is listed in the top 5 cement companies in the country. It has an entire cement capacity of around 29.65 million tonnes along with five integrated cement manufacturing plants. Apart from this, there is a total of eight cement grinding units across India.

ACC cement company is said to be the leading manufacturer of cement of course. It is ranked in the third position in terms of cement companies in India. It has actively become a part of the prestigious Holcim Group of Switzerland.

Ultra Tech cement company is termed the largest manufacturer of grey cement, white cement, and RMC or Ready Mix Concrete. It is a subsidiary of the Grasim industries that are owned by the Aditya Birla Group. Apart from this, it is also termed the leading cement producer on a world scale. Under the category of top 5 cement companies in India, this cement company is labeled as one of them.

Dalmia Bharat Cement company stands in the fifth position in the category of the top 10 companies in Cement in terms of total revenue. The manufacturing plants of this company have been expanded to the southern states of the country namely Tamil Nadu and Andhra Pradesh where its capacity is 9 million tonnes per annum.

Shree Cement company stands in the fourth position in the category of top of the 10 companies in Cement under the category of sales. It was incorporated by the Bangur family in the year 1979 and was based out of Kolkata. The first Cement plant was in the year 1985 where the installed capacity was 0.6 Mtpa.

The Indian Cement ltd was founded in 1946 by two men named Sri TS Narayanaswami and Shri S N N Sankaralinga Iyer. Their chief vision was just to inspire dreams for the industrial world of India. As of now, this company has now integrated cement plants that are across the country in Andhra Pradesh, Tamil Nadu, and Rajasthan as well as two grinding units.

Birla Corporation company is said to be the flagship of the M.P Birla Group incorporated as Birla Jute Manufacturing Company Limited in the year 1919. The credit for giving a definite shape to it goes to the auspicious Late Mr. Madhav Prasad Birla. Since he was the chairman of the company, he offered his best in changing the dynamic of the company by evolving it into a leading multi-product corporation along with multiple activities. Birla White Cement is one of the most popular white cement in India.

The Orient Cement was formed in 1979 year and is a part of Orient Paper & Industries. After being demerged in 2012, it has been successfully emerging as one of the fastest-growing as well as leading cement manufacturers in India. This company came into effect in the year 1982 in the Adilabad District at Devapur of Telangana.

This is a subsidiary group of the Heidelberg Cement Group of Germany. The operations of this cement company are carried out in Jhansi of Uttar Pradesh and Damoh of Madhya Pradesh along with a selective Southern region of the country namely in Ammasandra of Karnataka. It has been proudly listed in the top 10 cement companies in India.

Along with the above-mentioned companies, there are various other cement manufacturing companies in the country. Now that you have all the cement information, you are all set to make the right decision by choosing the correct cement.