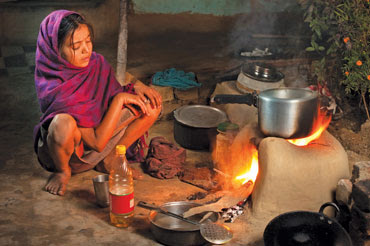 Under Pradhan Mantri Ujjwala Yojana, Government of india has approved Rs.8000 cr which will be used to distribute free LPG Connection in rural india. This scheme was first announced in Union Budget 2016-17 speech of Finance Minister Arun Jaitley.

Pradhan Mantri Ujjwala Yojana will aim to diminish “Chulha” or desi way of cooking via cow mud or with wood. Because of this old ritual way of cooking, Rural india’s  women faces serious health issues, which will be decreased by this new scheme.

“Women of India have faced the curse of smoke during the process of cooking. According to experts, having an open fire in the kitchen is like burning 400 cigarettes an hour. The time has come to remedy this situation,” Arun Jaitley said said in his Budget speech.

Earlier, Give Up LPG Subsidy program also was aimed to give free lpg connection and after announcement of Under Pradhan Mantri Ujjwala Yojana, it is clear that poor women’s of rural india will get good health, proper way of cooking, and free LPG gas connection.

Note :- Around 87 lac LPG connection holder has given up LPG Subsidy so far.

The Money saved via given Direct Benefit of LPG Subsidy – PAHAL will be also used under Pradhan Mantri Ujjwala Yojana to give free LPG connections. Well Spent Money, Mr. PM.