Skip to content
Check out Net worth of India’s most successful businessmen, Business Icon and also the richest person of India Mukesh Ambani is a much known face. Well, do you know that how he reached at this level? Want to know about the net worth of Mukesh Ambani? Let’s have a look at it here! 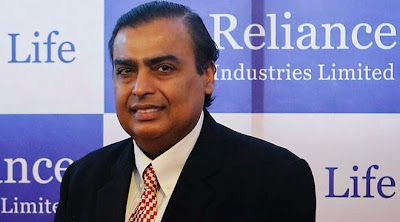 Mukesh Ambani was born on 19th April 1957. He is a son of Dhirubhai Ambani and Kokilaben Ambani. He has younger brother Anil Ambani and two sister named Dipti Salgaoncar and Nina Kothari. Dhirubhai Ambani was famous industrialist. The Ambani family was living in a two-bedroom apartment in Bhuleshwar, Mumbai till 1970. He has got the BE degree in chemical engineering from the institute of chemical technology, Matunga.

Mukesh Ambani Started his career in 1980 by helping his father Dhirubhai Ambani to develop the PFY (Polyester Filament Yarn). He was studying MBA at Stanford University at that time. However, Mukesh left MBA to help his father and he begun reliance’s backward incorporation from textiles into polyester fibers and later into petrochemicals in 1981.

Mukesh launched Reliance Infocomm Limited (Reliance Communications Limited) which was initiated to focus on information and communication technology proposals. Moreover, he planned to and directed the creation of world’s biggest grassroots petroleum refinery in Jamnagar, Gujarat, India. It has the capacity to develop 660000 barrels per day in 2010.

Mukesh Ambani lives in a private 27-storey building in Mumbai which is named as “Antilia”. This building is valued at US$1 billion and it is the most expensive home in history. The net worth of Mukesh Ambani is $92 billion USD according to the recent news. Moreover, his house has a parking space for 168 cars across 6 floors. He has 600 workers to maintain his home and also have luxury living and bedroom. He is India’s richest businessmen and he is in the list of world’s top 10 billionaires.

Moreover, Mukesh Ambani gifted Nita Ambani a $60 million airbus plane on her 44th birthday. The jet has all the facilities including wi-fi, office, hi-end music systems; satellite television etc. In addition, there is a facility of bathroom with wide range of showers and master bedroom as well.

Mukesh Ambani owns most luxurious cars including Maybach 62, Benz S Class, Bentley Flying Spur, and Rolls Royce Phantom, Mercedes SL500 and many more. The Maybach car’s price is 5 crore and it was Mukesh who brought this car in India for the first time. Moreover, he has BMW 760i which costs 1.9 crore.

Mukesh Ambani has received many awards and his first award was Ernst & young entrepreneur of the year from Ernst & young India in the year 2000. Moreover, in 2010 he was awarded with the global vision award at the awards dinner by Asia society. He was also awarded as a business leader of the year by NDTV India and businessman of the year by financial chronicle. In addition, the University of Pennsylvania gave him the school of engineering and applied science dean’s medal in the year 2010. The business of council for international understanding gave him the global leadership award in the year 2010.

This is the net worth of Mukesh Ambani. He has struggled a lot to achieve all this! Well, he is an inspiration of many people and why not! He is managing many companies and still expanding his business. In 2014, Mukesh Ambani was ranked 36 on Forbes’ list for world’s most powerful people. He is also a biggest shareholder of reliance industries. He holds 44.7% shares in the company.