Skip to content
Check Net Worth of Amitabh Bachchan, total income, property, cars owned by Amitabh bachchan and income source of Amitabh bachchan. The introduction is not needed when we talk about Bollywood’s great actor Amitabh Bachchan! He is a most loved and evergreen actor of Bollywood. He struggled a lot to gain popularity in entertainment world. Let’s know more about him here. 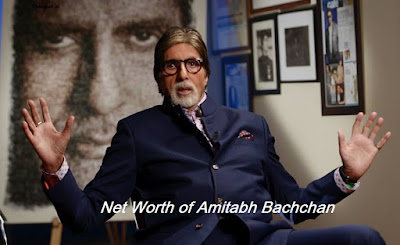 Amitabh Bachchan was born on 11th October 1942 at Allahabad. Amitabh was known with a different name “Inquilaab”. He is also called as a “Shahanshah of Bollywood” and “BIG B”. He is from a very reputed poet family of Mr. Harivansh Rai Bachchan” and Mrs. Teji Bachchan who was his father and mother. Teji Bachchan was admired as a recognized theatre artist. He got fame in early 1970s as the “Angry Young Man” of Bollywood. Amitabh tied the knot with actress Jaya Bhaduri in 1973 and they have two children named Abhishek Bachchan and Shweta Nanda.

Of course, Acting fees is amitabh bachachan’s biggest source of Income and contribute maximum in his Net Worth. Amitabh Bachchan made his debut in Bollywood in the year 1969. His first film was “Saat Hindustani”. He won national award for this film as a best newcomer. He got just Rs. 1000 for his first movie. He has given a great contribution to the Indian cinema since years. He has worked as an actor, director, TV host, playback, singer, and writer as well. He is also known as the most versatile actor in the Bollywood. Amitabh’s some of the most successful and super-hit films are Don, Trishul, Laawaris, Deewar, Amar Akbar Anthony, Namak Haram, Black, and Paa. However, the biggest hit was none other than “Sholay” of the year 1975.

He also worked in many TV advertisements such as Dabur Honey, Cadbury Dairymilk, Pepsi, Parker Pen, Gujarat Tourism, Maggi Noodles, Kalyan Jewellers and many more. Moreover, he has been working as a host for the famous and cherished TV show “Kaun Banega Crorepati”(which contributed huge in amitabh bachchan’s Net worth). In addition, he has acted in 202 numbers of movies and produced 16 movies till date.

Amitabh Bachchan has got “Padma Shri” award in 1984 for India’s fourth highest civilian award from the government of India. He got “Padma Bhushan” award in 2001 for India’s third highest civilian honor from the government of India. Also, he got “Padma Vibhushan” award in 2015 for India’s second highest civilian honor from the government of India. He has won national three awards for movie “Agneepath” in 1990, for “Black” in 2005, and for “Paa” in 2009. In addition, he got the “Lifetime achievement award during 4th Asian film awards in 2010 at Hong Kong. Amitabh Bachchan has been nominated 33 times for various categories of filmfare awards like best actor and best supporting actor. Besides, he also got filmfare special award for completing 40 years in the Indian film industry in 2011. Amitabh has got 6 IIFA (International Indian Film Academy Awards) awards.

Biggest contribution in Net Worth of Amitabh Bachchan is from Real Estate Property. Amitabh Bachchan owns $400 million dollars (Rs. 2400 crore) of property including everything. His has total 5 houses in Mumbai. Currently, he lives in a beautiful house named “Jalsa” which is located at Juhu with an area of 10,125 square feet. This house was gifted to Amitabh Bachchan in 1982 by Ramesh Sippy. Moreover, his other house is “Prathiksha” where he used to live with his parents Harivansh Rai Bachchan and Teji Bachchan. However, he visits that house once in a day. That house is valued at around 160 crores. In addition, he has two more houses at juhu and has purchased one new plot worth rupees 50 crores back to Jalsa. Amitabh’s approximate investment on real estate is around $ 300 crores.

Furthermore, contribution in Net Worth of Amitabh Bachchan comes from other assets. he owns many other assets including watch which is priced 1.7 crores and a painting which is worth Rs 3.8 crores. He has a bank account in bank of India where he has a FD of approximately 92 Crores and in a HSBC bank in United States where he has a FD of approximately $6.6 million. In addition, he has invested 69 crores in bonds, debenture and mutual funds, and shares.

Well, this is all about Mr. Amitabh Bachchan the most promising actor of Bollywood. This is how he got multimillionaire, this is how he collected such huge net worth in his entire lifetime. He is on 2nd number of India’s millionaire Bollywood actors. We all are looking forward to see upcoming movies of this superstar!