Here is the Latest Update related to the Delhi – Mumbai Expressway, The Dream Project of Prime Minister Narendra Modi. This will be India’s Longest Expressway, which is 1350 KM in total length (but now it’s 1452 KM after adding the Jaipur spur and Jewar Airport Spur). 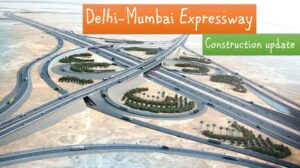 Prime Minister Modi laid the foundation stone of the Delhi – Mumbai Expressway on 9th March 2019. In Just 3 years of time, NHAI has completed the Land acquisition, Awarded all package works and now 50% road is 100% completed. Below are State Wise Details of How much work was completed in which state. For Those who don’t know, Delhi Mumbai Expressway will pass from Hariyana, Uttar Pradesh (Jewar Airport), Rajasthan, Madhya Pradesh, Gujarat, and Maharashtra.

The work of India’s Longest Expressway is in full swing and 607 km is already done which is very good news. The deadline for the entire expressway is March 2024 (just before the General Elections of 2024), which looks possible to achieve.