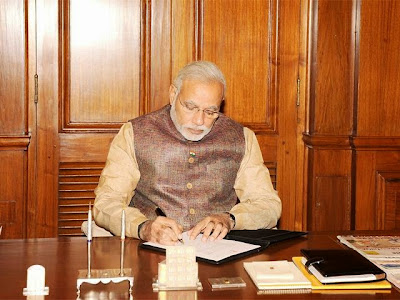 1. Launched Swachch Bharat Mission with promise of total sanitation by ’19. Modi has nominated many celebrities to join this campaign, including Amitabh Bachchan, Salman khan, Anil Ambani, Suresh Raina and many more. Many people now devoted to cleanness program and there is bit awareness between people about sanitation.

2. Jan Dhan Yojana, More then 44cr Bank Accounts has been opened with in 7 years for free with zero balance, 10cr+ Rupay Debit Card (india’s own debit card) has been issued so far.

3. PAHAL Yojana, giving Subsidy for LPG GAS Directly to your bank account, which saved billions of rupee by stopping corruption. Now you get subsidy for gas cylinder which delivered at your home and only in your account. Also, 2lakh+ family give up lpg subsidy to help poor families of india.

4. FDI (Foreign Direct Investment) allowed in Railway without limit, Japan and China to help for making Bullet Trains in india.

5. FDI in Defence Sector raised to 49% and 74 % in case of technology transfer. This will help making defence equipments in India only, will boost Make in India project.

8. For next five year, $130 billion proposed spending on railways which will give bullet trains in india, one between Ahmadabad-mumbai and one between Mumbai- Delhi.

12. Launched Mudra bank to help new entrepreneurs in india to get Loan up to Rs.10lakh, allocated Rs.20,000cr.

16. Created single window office to get approval of steel, coal and power projects, right under surveillance of PMO.

17. Introduced Black Money Bill to stop saving dirty money. Provided provision of Rs.10lakh up to fine and 10 years of Jail.

21. Set up panel on the issue of minimum alternate tax right under law commission chairman.

23. Introduced Sansad Adarsh Gram Yojana, Each Member of Parliament (MPs) to adopt one village every year and to make it model village.

24. Introduced Beti Bachao Beti Padhao campaign to save girl child in india with introduction of Sukanya Samriddhi Yojana which will give up to 9.5% of interest rate for girl child education, financial scheme.

26. Australia agreed to give Uranium, will boost project of 24*7 electricity to entire india.

28. Got back indians from Yamen and Iraq with in time. Provided relief material to Kashmir flood victims and Nepal Earthquake affected people in time.

29. One Rank One Pension is finally a reality. Almost 23cr Ex-serviceman, War-widow will get benefit of this pension scheme.