The Flughafen Zurich AG south of Greater Noida is planning to develop the Noida International Airport that is in Jewar. It is being constructed with the plan of accommodating around 60 million passengers on an annual year basis in the upcoming future. Furthermore, a broad vision of 4 terminals as well as 2 runways are being planned that will make it the largest ever airport in India. To make transportation easier in this lane, it was on 8th July of 2022 when the government finally approved constructing a 31.425 km road that will link the Jewar Airport with the Delhi-Mumbai Expressway.

The following planning module is being laid out for Noida’s Jewar airport map:-

The primary objective of the plan is that it was proposed by the government to expand all the airports that are existing meanwhile building a new one to not only support the growth of regional air traffic but also to sustain the growth of the air traffic in the regions of congested metros.

The following are the primary features of the plan regarding the Jewar international airport:-

It was on 7th October 220 when Uttar Pradesh and Zurich Airport signed a 40-year concession agreement. It was done after the Zurich Airport placed one of the highest bids of around Rs. 400.97 for each passenger thus beating Adani Enterprises. The second phase of the project’s land acquisition initially began in 2021 January. Furthermore, Cengrs Geotehcnica conducted geotechnical and groundwater surveys as well as site preparation works and so. Among the highest bidders for jewar airport construction, APCO Infratech was announced as the lowest bidder of all time to build a 30 km 6-lane expressway that will range from Noida Airport to the Delhi-Mumbai Expressway.

The Zurich Airport selected the STUP, Grimshaw ad Haptic Architects, Nordic and it was the winning design hence by Gensler Arup and SOM Mott MacDonald. It was in 2020 December when the layout was finalized along with the carbon-neutral design of Terminal 1. According to haptic architects, the design combines Swiss efficiency and Indian hospitality since it helps in providing a smooth passenger experience thereby setting new benchmarks in terms of sustainability for the terminal airport buildings in India. The main aim of the airport is to provide a local as well as a regional hub that will help in meeting the expectations level of passengers. 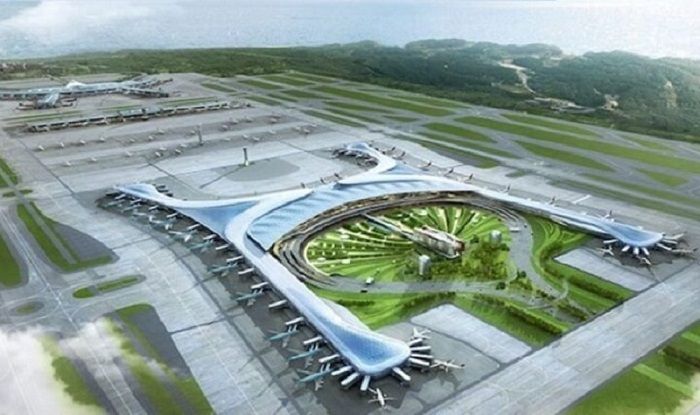 The Noida International Airport- the dynamic modification of UP

The Jewar Airport is also known as the Noida International Airport of NIA. It is planned to decongest the Indira Gandhi International Airport in Delhi which in turn will give a boon to Uttar Pradesh’s economy which is one of the BIMARU states in India. One of the renowned contributions of the Jewar Airport that is estimated to happen is that it has the potential to offer the category of the sole state of India that has a unique type of international airport. Apart from that, UP will also help in leveling up the global logistics map. This is because it is the only airport that is incorporated with a unique kind of integrated multimodal cargo hub.

It has been estimated that the Noida international airport will be operating by 2024 September. It is located nearly around 80 kilometers far from Delhi’s national capital. Furthermore, it will also provide a connectivity boost to numerous key cities of the notable state that is Uttar Pradesh. Along with elevating the investment as well as employment opportunities in multiple cities of the states, it is also in the line of being developed in a PPP or public-private partnership mode that helps in taking off the load of air traffic burden.

In terms of Jewar airport’s location, it is built in the following key considerations:-

Thus, the Jewar international airport will compose of two runways, with a capacity to incorporate around 70 million passengers annually along with a cargo handling capacity of around three million metric tons every year. In terms of work, the project has been started in 2017 of April and all this has been done because of the smooth coordination between both the state and the center. This is all the information about the new Jewar International airport.