Skip to content
The tax payers looking for non-deduction of tax from some incomes are needed to fill a self declaration by filling a form no 15G according to section 197A of the income tax Act, 1961. Here, we have included the new format and procedure of filling Form 15G and Form 15H. Let’s have a look.

To reduce the cost of compliance and ease the compliance load for both the tax payer and the tax deductor, The Central Board of Direct Taxes has cut down the procedure for self declaration and commencing new Form 15G and new Form 15H in new format.

In addition, the procedure for filling both the forms has also been changed. Moreover, the modified procedure will be effective from the 1st October 2015.

If your income is below the taxable limit, you are allowed to submit the Form 15G and Form 15H to the bank or any deductor asking them not to deduct any TDS on your interest. The Form 15H is for senior citizens and 15G is for all the others.

These forms help consumers to get exemption from TDS on interest earned on investments such as bank deposits or EPF withdrawals in a financial year. A fresh form has to be submitted in every new financial year by the beginning of every financial year.

Here is the maximum interest income not charged to tax during the financial year where form 15G/H is submitted at bank.

2. Upto Rs 300000 for senior citizen residents of India who are between the age of 60 to 79 years at and time throughout the FY.

1. Under the simplified process, a payee or an individual is allowed to submit the self-declaration either in paper form or by e-mail.

2. The bank will not deduct tax and will assign a Unique Identification Number to all self-declarations in agreement with a well laid down process.

3. The particulars of self-declarations will have to be provided by the deductor along with UIN in the quarterly TDS declarations.

4. The prerequisite of submitting physical copy of Form 15G and 15H by the deductor has been distributed.

5. The deductor will be required to keep Form 15H and Form 15G for seven years. 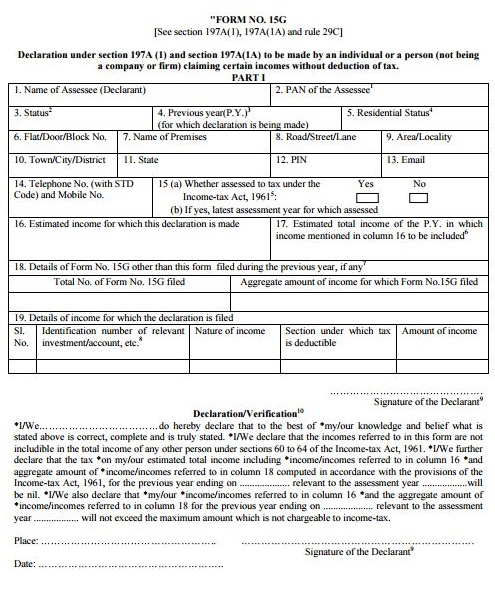 Here is the new format of Form 15G and Form 15H. Moreover, the form has thorough information about how to fill up the new Form 15G and 15H.